At the end of the sixties, groups of specialists in rock garden cultivation split off in four basic Prague organisations of the ČOZS (Czechoslovak Union of Fruit Growers and Gardeners). Therefore, it was a natural need to strive to concentrate these growers in one specialized organisation (such as the one created in Pilsen), where all the dreams and members’ needs could be realized. The conspirators gathered at the Valdek cafe (allegedly for coffee) in Vinohrady and discussed the ideals of their own club. During 1969, diplomatic negotiations (preparation of an independent organisation) met with the approval of the Central Committee of ČOZS, and thus the Club of Rock Gardeners Prague (specialized basic organization COSS) could be established. The preparatory committee invested CZK 1,100 from its pockets, sent all the basic organisation information about the CONSTITUENT MEETING and the public was informed about the event by an article in the Evening Prague magazine. The constituent meeting was held on March 3, 1970, in a concert hall on Slovanský Ostrov. The hall was full and there was a great Dr. Radvan Horní “Plant communities on rock gardens”.

At the beginning of the following year (1971), KSP had 378 members and they all had to pay two membership fees: one for the club itself, the other for the national colossus of the ČOZS. In 1976 the club had 845 members. The number of members then rose to about 1,400, but over the past decade, the number of members began to decline regularly to almost 600 today for generational reasons.

In the history of the club, club rooms were arranged in three places in Prague, serving the library, club committee meetings, and seed exchange events.

The abilities of the founding members of this new club are evidenced by the fact that the so-called special-purpose publication, the quarterly Skalnička No. 1, was published immediately after the constituent meeting. Editorial board under the leadership of Dr. Zdeněk Moravec managed the first year of Skalničky when only 2 issues were created. The board members were also members of the committee, besides, there was a graphic artist – artist Rudolf Ducháč, who excelled in the first years. In 1971, four regular issues were published.

The change occurred in 1972 when the editorial board was strengthened by experts and talented writers such as Václav Pleštil, Ing. Milan Prášil Zdeněk Seibert and Ing. Vladimír Vašák. The purity of the Czech language was supervised by Professor Anna Wein, with Ludmila Šubrová taking charge of the board. In 1973, the editorial board had the first problems with the lack of articles and there was an apology for the irregular coming out of Skalničky: the publication was typed in households, proofreading and typing had to be pasted before everything was photographed for the printer needs and the printer cargo time.

Another big change in the content and graphics of Skalniček was the arrival of Josef Halda and his wife – illustrator Jarmila Haldová. Josef Halda was a very potent author at that time and thanks to him we created a professional membership premium „PRIMULACEAE“ bringing us to the classic rock garden families of the primrose family, such as primrose, cyclamen, etc. In 1974 Josef Halda left because of an argument and returned to Skalničky as an author in 2013. Another professional membership bonus was the BOTANIC DICTIONARY (morphological and terminological) of Vlasta Vodičková. The enormous membership premium (linked to the English version) was the book LOMIKAMENY SEKCE POROPHYLLUM by Dr. Radvan Horný Karel Mirko Webr and Eva Zoulová (drawings). For the sake of completeness, it is necessary to mention the membership premium on New Zealand rock gardens (Pavel Šlauf and Vlasta Vodičková) and the monograph of the genus Sempervivum by Dr. Svrčka and some others.

After Ludmila Šubrová, Dr. Vlasta Vodičková-Kneblová led the editorial board for many years, adding that illustrations were often made by the academic painter Eva Zoulová and black and white photographs of Josef Stárek began to appear. Professional editor Martin Pilný briefly took over the creation of Skalničky. But Dr. Marie Lhotská led the editorial board for the longest. During her work, readers could appreciate the nice paintings of Marcela Adamcová and the first color photographs of rock gardens.

Over the past six years, the number of pages of Skalničky, which are now full-colored, has increased. Instead of the editorial board, the responsible editor Zdeněk Zvolánek works with two occasional editors.

The whole perspective development of the club’s publishing activities has been and is possible because of the funds obtained from the entrance fees and from the sale of plants at club exhibitions.

The quality of the lectures at the beginning of the club’s existence was technically limited. The quality lecturer, the expert, was limited by the poor quality of affordable photographic films and slides (mostly ORWO from the GDR) and also the normal cameras of the time poorly measured the enlightenment of flowers and „burned“ brilliance. In the first year, however, the club offered outside the introductory February lecture of Dr. Radvan Horný, also called “The Most Beautiful Spring Flowers” in March (Oldrich Ruzicka, Jiri Vavra, and Dr. Zdenek Moravec) and “High Mountain Plants on a Rock” in April (Jaromir Grulich of Sedlonov in the Orilické hory). In May, Franz Hadaček from Vienna lectured on Scottish gardens in a Czech language. At that time people were so interested in lectures that there were several Discussion Evenings in the hall of the U Holubů restaurant in Smíchov, full of information and excitement. People were always very interested in lectures held under the roof of various public institutions because Evening Prague and the popular magazine Zahrádkář informed about them. The best quality pictures at that time were projected by the German bulb collector Erich Pasche, a friend of the leading Czech botanical bulb expert Ing. Milan Prášil. Dušan Pangrác’s enthusiastic lectures were always very popular because of good pictures and good cultivation advice. Josef Stárek had high-quality pictures (aesthetically and technically).

Improved quality of projected images and content of lectures occurred when in 1985 Josef Halda and Josef Jurášek bought high-quality Nikon cameras and began to travel to unknown mountains. In their footsteps went the young man Ing.Vojtěch Holubec.

A huge revolution in the quality of lectures came with the advent of digital cameras and the full opening of the borders from Bohemia to the west and east. Since then, KSP lecturers have been spreading expertise on rock gardens and mountain flowers to all larger Czech and Moravian rock gardeners’ clubs. Namely, it is Ing. Vojtěch Holubec, Josef Jurášek, Zdeněk Řeháček, Ota Vlasák and Zdeněk Zvolánek.

For two decades, an educational system of lectures for a weekend trip to a hotel in a nature has been developing. This way, distant KSP members who cannot attend lectures in Prague, can attend lectures elsewhere. The concentration of growers for three days allows us to include a series of lectures with lecturers from abroad.

FOR A MORE BEAUTIFUL PRAGUE

An organisation or association specializing in creating natural-looking gardens cannot demonstrate its goals to the public by exhibiting inside buildings, it needs an exhibition garden. The Prague Rock Gardeners Club first started showing its sprouts and creations in the open air in Vojanovy Sady, where it could not afford to build and plant a permanent rock garden (citizens would soon disassemble it). It was necessary to leave Vojanovy sady after four successful 14-day exhibitions (reconstruction of a large terrace, which was suitable for the exhibition). The state-owned company Sady, lesy a zahradnictví (Prague park manager) was not able to allocate another suitable piece of land to us, so we stopped our cooperation.

We needed a protected (lockable) garden in the city center where permanent exhibition rock gardens could be built because it is pointless to demolish and then again construct new rock gardens for each exhibition. It seems that we were lucky to find an optimally situated place in the parish garden of the Baroque Church of St. John Of Nepomuk On The Rock. The year was 1980, and the parish garden was in desolate condition – 30 years without maintenance. The previous user was a pioneer organisation whose traces are still visible on the damaged faces of all sandstone sculptures.

We were still a relatively young organisation with younger, strong and enthusiastic members, so we managed to adapt the garden to such an extent that with the help of television and the press we had even 30,000 visitors at one record May exhibition. Our May exhibition garden has been a jewel on the dusty breasts of Prague for 30 years. It is a surprising oasis of silence and aesthetics in the bustle of the city.

In recent years, the garden has suffered from endless repairs to the church mantle and long baroque walls. Our membership base has been halved, and the enthusiasm, and most importantly, the strength of the elders is slowly easing. The mass media are not interested in our nation’s educational events, so the public knows little about our nice exhibitions in the center of Prague and the number of visitors decreases.

Another of our contributions to the ancient event For a more beautiful Prague was the lease and reconstruction of the adjacent ruined garden lining the Faust House (Pharmacy) on Charles Square. Here our club spent considerable funds on stone paths and terraces of the meditation garden. It is a large area belonging to the city and there is still a need to complete the reconstruction of the rear part, which borders the hospital.

Both gardens are located on a high ridge with stored rubble of the once demolished Prague; they are overgrown with roots of old thirsty trees (headed by an ancient oak tree) and so it is impossible to grow more demanding plants permanently. Even so, our watering costs for permanent planting are considerable. We pay rent to the city and church for the use of the gardens, and we pay for maintenance from our resources.

The Czech school of construction of rock outcrops at crevice rocks has no competition in the world and the tasteful arrangement of rare rock gardens is exemplary. That is why we think that we are still a constant benefit for artistic Prague and its visitors. 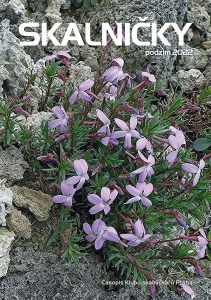